Meet Ally - 'You are going to love your life' 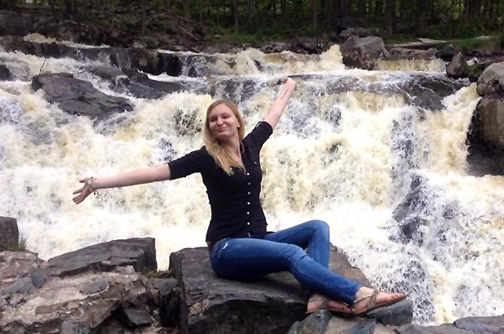 Ally began life in Russia, and while she's only 21 years old, the twists and turns of her life thus far suggest the drama one finds in a Russian novel.  Born into an alcoholic and abusive home, she and her sister were removed and placed in an orphanage.  Ally didn't think life there was too bad, but her sister, five years older, found it intolerable, and ran away.  Ally never saw her again.

At seven, Ally was adopted by an American family, and came to live in the Catskills region of New York.  In this family, she had an older sister who was also adopted from Russia.  But something didn't click and Ally never felt loved or at home with this new family. Things went from bad to worse, and when she was 16, Ally spent a month in jail.  After a brief stint of living with her sister, the county offered to place her at Vanderheyden.  She jumped at the chance, and says that suddenly she felt as if so many people were invested in her happiness and future.  She felt at home in her cottage on campus, and developed a warm relationship with the house manager, Stephanie Ferrone.  "She became a mentor to me," says Ally.  "She never judged me, no matter what I did.  She said, it's my life to live and I'm going to love it."

While at Vanderheyden, a family in Putnam County took an interest in Ally, and she spent many weekends and vacations with them.  They offered to adopt her, but Ally decided that being adopted once was enough.  Despite that, Ally considers them her real family and remains close with them.  They are all going on a cruise to the Bahamas next month.

Ally graduated from Vanderheyden's high school with honors, and now lives on her own in Albany.  She works in a Wildwood Programs group home, helping take care of five autistic men.   "I don't want to be cocky, but I think I'm one of their favorites," says Ally.  "I like the guys and can relate, because I have lived in a group home.  We have a lot of fun."

Ally wants to begin college part-time and travel while she is young.  An all-expenses-paid trip to Russia may be in her near future, courtesy of a reality TV show there that wants to reunite Ally and her Russian sister.  Ally learned last year that her biological sister had been searching for her for ten years, even hiring a private investigator.

Not surprisingly, their eventual connection happened via Facebook. That led to the offer to bring Ally and a guest to Russia, to meet her sister. Their communication now is limited to smiles and waves on Skype, because Ally doesn't speak Russian, and her sister doesn't speak English.  But Ally is in the process of getting a passport and planning to learn Russian.  There is a Russian church down the street from where she lives, and she's going to walk in one day soon and ask if there is anyone who can help her learn the language.

Asked how she has maintained her sunny, can-do outlook given all that she has lived through, Ally responds, "People have been through a lot worse than me, and they are still standing.  I'm still here, it's life, you've got to live day-by-day, and you can not be scared."