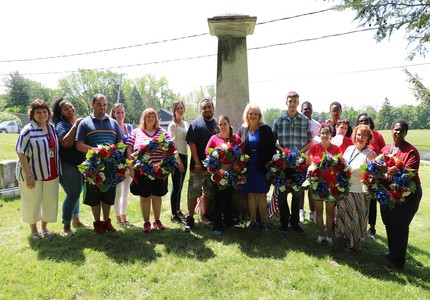 WYNANTSKILL, N.Y. - Vanderheyden Team Members and individuals participated in “A Day of Remembrance” in advance of Memorial Day on Friday, May 25, 2019 at 11:00 a.m. at Oakwood Cemetery in Troy, New York.

Six residents from Vanderheyden Hall, formerly known as the Troy Orphan Asylum in Troy, and the Fairview Home in Colonie, who died in the Civil War, World Wars I and II and Vietnam were honored.

The ceremony was held at the Troy Orphan Asylum obelisk, which is located adjacent to the Victorian fountain area, directly across from the Earl Chapel and the historic Meneely tolling bell.

The heroes who were honored:

• Herman A.C. Gajeway, Jr, Water Tender First Class, U.S. Navy, who died October 17, 1941 in the Battle of the Atlantic. He was awarded a Purple Heart.

• Preston Russell Smith, Sergeant, 26th Infantry Division, U.S. Army, who died in Sicily during the North Africa campaign on July 27, 1943. He was awarded the Silver Star and an Oak Leaf Cluster.

As part of Vanderheyden’s 185th Anniversary, an initiative is underway to identify, honor and locate the graves of the estimated 250 children who died under the agencies since 1836. More information will follow soon.

Vanderheyden began as the Troy Orphan Asylum in 1833. This year, Vanderheyden will celebrate its 185 anniversary. Today, our facilities provide a safe haven for youth, adults and families who have experienced family disruption, trauma, abuse, emotional difficulty, developmental disability and learning problems. The Richard A. Desrochers Educational Center at Vanderheyden is a Regents accredited 7-12 grade program that provides education to individuals who are at risk of not succeeding at school, and those in need of a special education. Vanderheyden is committed to a family focused, trauma informed, and community based system of care. For more information visit www.vanderheyden.org and follow us on Facebook.